On the second day of the Carnarvon Great Walk in Carnarvon National Park I am standing on top of Battleship Spur, overjoyed at the majesty of the scene before me. From the viewpoint I look down on the meandering chasm that is Carnarvon Gorge. It is my fifteenth trip into the Carnarvon Ranges, yet it the first time I have made the climb to this most famous of the all the lookouts in order to see the iconic view. After all the effort of climbing the 600 metres from the Gorge floor I am amply rewarded. It is a beautiful sunny day. The view is superb. I want to cry.

Often labelled Australia’s Yosemite, the Carnarvon Gorge is very different in geomorphic origin from that renowned valley hacked out by ice-age glaciers into a granite massif in the heart of California’s Sierra Nevada. Our gorge was formed as Carnarvon Creek eroded away overlying basalt and sedimentary strata to slice a canyon through 100 metres of Precipice Sandstone. The sandstone formation began as an accumulation of coarse quartz sand and pebbles on the coast of the drifting Australian continent. It was uplifted with other sedimentary beds in a massive humping and crumpling epoch of mountain building that took place during the early Tertiary geological period. A giant shield volcano, active over several million years, then capped the ranges with layer upon layer of basalt. High on this basalt is where Carnarvon Creek started in the slow 25 million year process of cutting out the Gorge – a long time frame, yet a spectacular result for the eyes of present day humans. We are privileged.

Not only here at Carnarvon Gorge, these Precipice Sandstone cliffs, beautifully ordained in splendid white, or dappled in pink and purple, and fretted by time into intricate patterns of form and line, also dominate the scenic vistas for the bushwalker throughout the National Parks and range country in the 82,000 square kilometres of the Central Queensland Sandstone Belt.

It is the signature rock formation whether viewing the landscape from the valleys and plains below or the less visited lookouts and high vantage points above. It outcrops across a swathe of country from the Isla Gorge National Park north of Taroom, all the way west out to the Salvator Rosa and the Goodlief precincts that have been added to extend the Carnarvon National Park close to the town of Tambo.

In my novel, Cave Hill, the storyteller, James Delbridge, has this to say about the Carnarvon Range area: 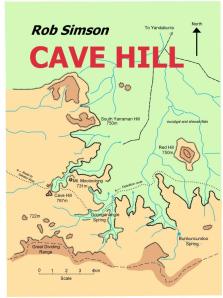 Across the centre of Queensland there lies a rugged sweep of sandstone landscape. It is Garinbal and Bidjara Country – wild, spectacular, moody. Few people live there and few people know it.  It might also continue to remain that way but for the popular and much visited wonder that is Carnarvon Gorge. I love its breathtaking vistas and imposing clifflines, with colours that mirror the beauty of the winter sunsets – the pinks, the purples, and the gold.  I adore the spring-fed trickling streams, the secretive moss gardens, and the stately cabbage-tree palm groves. I have special memories of pondering the mysteries of the ancient macrozamias, of delighting in the pendulous racemes of golden flowered acacias, or of watching honeyeaters stealing nectar from unnamed grevillias, while my puny human frame cowered under towering stands of the stately blue gums, the mighty Eucalyptus tereticornis ……..When time allows, and I venture back into Queensland, the Carnarvon country compels me. It lures me in. It is the compass needle in my heart.

In this James speaks with my voice, and I believe for many other visitors who are charmed by the wonders and beauty of the area.

I wish to acknowledge, as in the passage above, that this is Garinbal and Bidjara country. The two nations have Native Title claims over substantial areas in the ranges. Their claims are justified by their very long association with the Carnarvon region. An excavation at Kenniff Cave in the Mt. Moffatt section of the National Park by Professor John Mulvaney revealed a period of occupation dating back 19,500 years – an extraordinary length of time for one cultural group. The caverns in the sandstone would have provided excellent rock shelters for generations after generations of aboriginal families, and there would have been abundant water and game available to meet their basic needs. It is clear that Carnarvon Gorge itself with its art galleries and midden materials was frequently visited by at least one of the tribes. Early archaeological excavations in the floor of Cathedral Cave produced abundant artefacts but the results were poorly recorded and effective dating of the material was not carried out. The site known as the Art Gallery, further down the Gorge, with its stencil art and rock carving, is thought to have been an important ceremonial site. Burial caves were discovered high on the cliff near by this gallery – the remains of the deceased wrapped tightly in tubes of bark, the common burial practice in this part of Aboriginal Australia.

JD’s photo of me in Cathedral Cave

The opening up of the Carnarvon country for European squatters followed the expeditions into the area by Ludwig Leichhardt in 1844 and Major Mitchell in 1846. Leichhardt crossed and named the Dawson River and later the Comet River on his way through the Expedition Range area, part of a tortuous journey all the way to Port Essington at Cambridge Gulf on the north coast of the continent. John Gilbert, naturalist with the expedition, is reported as describing the sandstone clifflines of the Expedition Range area as ‘ruins of old castles, Druidical stones’.

When Mitchell passed much further west crossing the range country from the Maranoa into the upper Nagoa River catchment, he was also enthralled by the landscape with its open eucalypt forest, spring fed streams, sandstone cliffs, and ridge lines of castle-like pinnacles and spires. He named the valley Salvator Rosa after the Italian artist whose work he admired. Mitchell wrote in his diary, ‘Those beautiful recesses of unpeopled earth could no longer remain unknown….. I never saw anything in nature come so near these creations of genius and imagination.’