Pass, gorge, gap, chasm? After visiting so many in the West MacDonnell Ranges it is difficult to remember from the photographs which is which. I visited several of these sites with Life’s an Adventure on a 5 day tramping trip. So here are my photos and impressions of some of those special places so significant in the folk law of the indigenous peoples.

The first site was Stanley Chasm, such a narrow defile cut into the pre-cambrian rocks and lit up in various colours according to the light at the time of entry. The chasm is now blocked at the north end by a landslide composed of huge quartzite boulders.

Then we walked over the range into the Ormiston Pound and out through the broad gap that is Ormiston Gorge. We were told it was quite a dry year but I was surprised by the amount of water. It turned out to be a photographers delight yet my special interest was the geology.

To think that the rocks around us were laid down as sediments 700 million or more years ago as part of the Earth’s earliest continental crust, and had drifted to almost all points of the globe before being thrust up in mountain building orogenies, crumpled and metamorphosed by pressure — the sequence is uncertain — before being lodged in the centre of the continental land mass that is Australia,the superimposed streams

of much wetter climates wearing away the more recent sediments and cutting through the rangers to be gathered into the Finke River flowing south. Now the country of Central Australia is a dry desert landscape, the West MacDonnell clothed in species of spinifex, hardy hakea, and red mallee clumps, with river the lovely red gums along the creek lines. 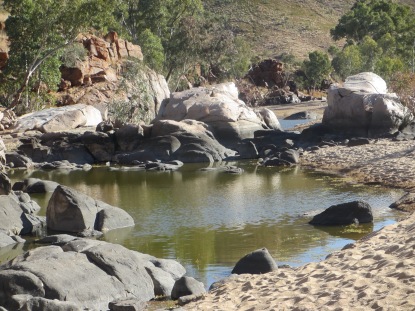 At the magnificent Glen Helen Gorge I tool photos on my Ipad of the large pools and the kids swimming. Some day I’ll find our how to transpose them to my computer.

I believe the next photo is Serpentine Gorge then the Ochre Pits and Inarlanga Gorge with the smoky green fronds of the the ancient cycads.

The Ellery Creek Big Hole where we lunched on our final day was really special. It was busy with tourists bur never-the-less spectacularly beautiful, one of the true highlights of our adventure.

Simpsons Gap in comparison was somewhat disappointing, which far less water than I remember from a previous visit

and with no rock wallabies to be seen,though our guide, Daniel, sat waiting for an hour hoping to spot one frollicking amongst the rocks on a large scree slope.

Retired geography and outdoor education teacher who loves orienteering and writes novels.
View all posts by rpsimson1936 →
This entry was posted in Uncategorized. Bookmark the permalink.